Few companies have had as much a role in helping people unleash their creativity as Adobe. Kristen Toole manages the Content Experiences & Innovation team at Adobe, and is based in San Jose, California. The rest of the team, made up of designers and a content strategist, are based in the company’s  Bangalore and Noida, India offices. When the team first formed in early 2020, Kristen and her manager wanted to take on a bold new charter.

“We wanted to not just be a team of designers, but a team that was focused on experience and innovation,” she says “Along with that, we thought a lot about how we break the cycle of doing the same things over and and over again, the same way it’s been done for years and years. If we truly wanted to be a team focused on developing next gen experiences, we should start with our own culture.”

She hadn’t worked with the team before, so she knew she needed to take time to earn their trust. “They had another manager, and then I show up, on the other side of the planet, without a design background. The question was how are we going to bridge that chasm, and turn a team of very capable designers into a highly effective, complete team that could drive real change.”

This all took place right before the Covid19 pandemic. The team was cautious in the beginning as they determined the best way to work together. Kristen decided to start by using Range status updates — known as Check-ins — to improve cross-team awareness of how work was moving forward.

Getting the hang of Check-ins

“The first thing we implemented was Check-ins — I think of them as mindful status updates. I didn’t want to micromanage the team, but I wanted to see how things were going; what they chose to spend time on, what was important, what wasn’t important.”

“As a manager, Check-ins really helped me do away with all the weekly status reports in email."

Then the pandemic hit, and it changed how the team related to each other. Everyone began working from their homes. “It was the great equalizer in a way. Suddenly it was less about who is based in headquarters, or this office and that office. We had an opportunity to build a team culture in a unique way, and I actually think Range helped facilitate that quite a bit.”

Each day, the team uses Check-ins to report on what they plan to do, what they’ve done, flag any issues, share their mood, and answer a team-building question. “The questions were a great way to get to know each other. People were commenting on responses, adding emojis and it felt really good.”

Kristen let the team figure out how to best use Range and write Check-ins on their own, and didn’t mandate exactly how they were expected to do it. She tries to lead by example by filling out her own Check-in and answering team questions every day. “As a manager, Check-ins really helped me do away with all the weekly status reports in email. For example, being able to add my Trello items to my Check-in is super useful, instead of having to add it to an email thread. Instead, everyone knows what everyone is doing and it gives me the impression of how the team is doing without all the busywork.”

“We’ve built a lot of trust on the team over the last year. We’ve also matched up designers on projects,” Kristen explains. “Now it’s really interesting to see how people talk about how this would have never happened if they had been in person, and they hadn’t worked with some of the different frameworks and tools like Range to facilitate collaboration and communication.”

The Content Experiences & Innovation team also uses Range to run their meetings. Once they got used to Check-ins, they started using this feature. “When it comes to engagement, the game changer was spinning the wheel we use to kick off the meeting.” The spinner tool is a feature teams use in Meetings to determine who should speak. The spinner shows everyone who is taking part in the meeting, and the facilitator can spin it to select a person at random to speak. Research shows if someone speaks at the beginning of a meeting, they are more likely to stay engaged throughout.

“The team love, loves, loves to spin,” Kristen laughs. “If I host a meeting with another team, they request we use Range so that we can spin the wheel. And as a manager I love the function of being able to create action items in real time and that notes are shared at the end, and everyone can bring those into their Check-ins. I can’t say enough about being able to turn actions items into things that actually get tracked.”

“What I started to notice about six months into using Range, especially relating to the meeting function, is that it’s become so much easier to create an agenda, and we’re constantly actioning things.” With Meetings, you can set recurring topics, and then add topics during the meeting as well, using the spinner tool to do a round robin. “Capturing notes has now changed from a passive thing to an active thing. And engagement is so much higher in these meetings,” she says.

For managers who are starting to use Range, Kristen recommends not trying to do everything at once. “Figure out what will add the most value to start, then build from there. Your team will probably latch onto a few things initially. Try Check-ins with a few integrations. Get feedback from your team, then test features like meetings and go from there. The nice thing about Range is it’s not all or nothing.”

Sign up for Range to run way better meetings

Team questions have become central to how the team connects. For each team meeting, they build 15 minutes into their agenda to do team-building icebreaker questions. “It’s everyone’s favorite part of the meeting, and that’s why we give it time. Other people might do that for a few months and then say, ‘OK, we’re a team now, we’ll skip that and be all business.’ We said no, this is crucial to who we are as a team. People still talk about what were their favorite questions.”

Kristen has found that the approach to questions is really important. When they interact with other teams, they’ve collected the right “first questions” to ask them, to make it easy to participate and establish a rapport. “I make it a practice to answer every question, and to be as open, honest and vulnerable as I can be. So if the question is ‘what are you bad at’ or ‘what’s a career-limiting trait’, I answer it as honestly as possible. We want a culture that is trusting and safe, and that starts with leaders.”

These questions plant the seeds for topics that come up in 1:1s. “A trend I’ve watched grow is that the team starts to bring up development topics in 1:1s that started as a question from Range, such as ‘how to have meaningful strategic conversations’.” 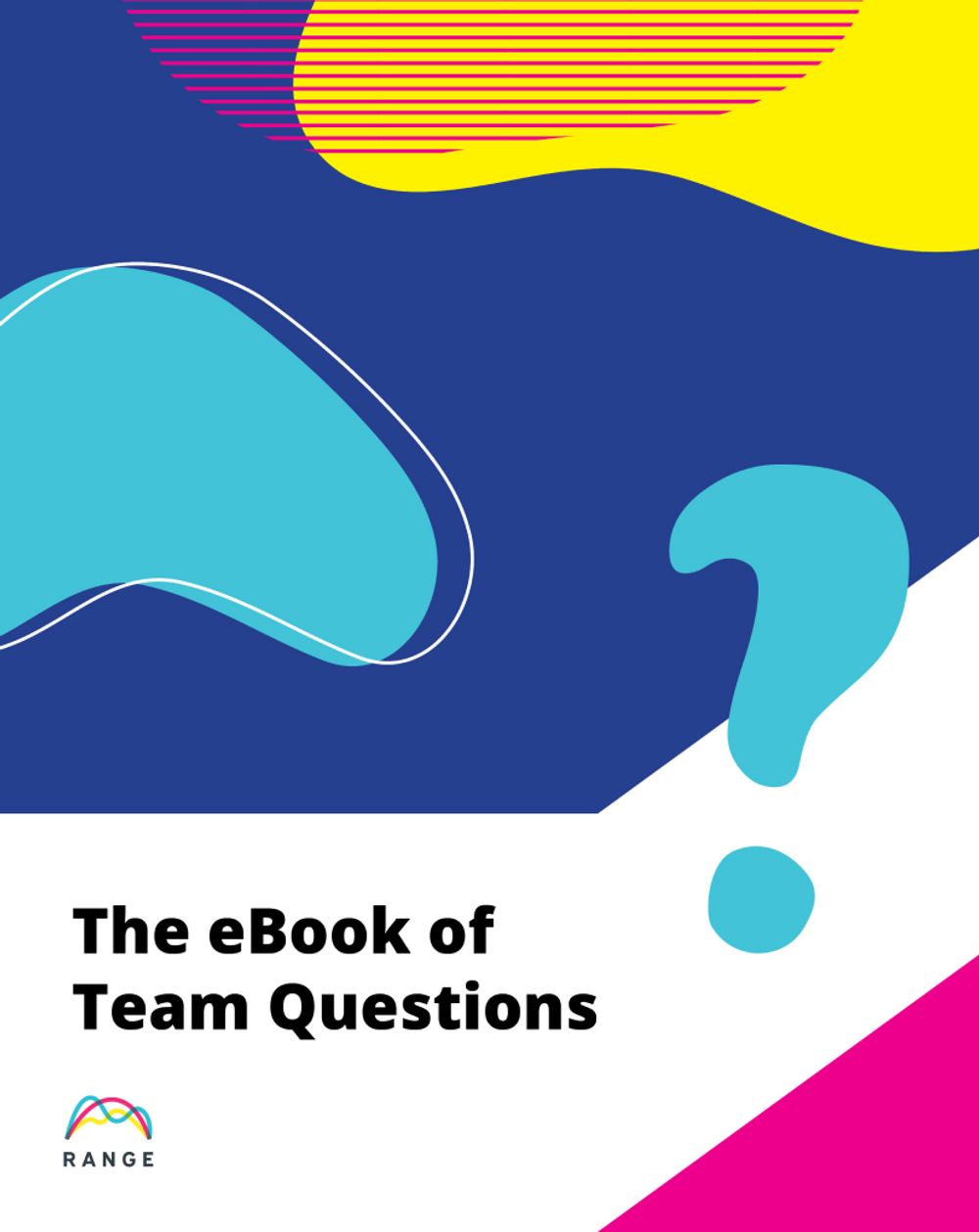 Asking team questions on a regular basis has built up a shared sense of memory, deepened their understanding of each individual on the team, and strengthened their connections. “Now we know all sorts of awesome things about each other. It comes up in jokes, meetings, 1:1s. It was the instant way to build that feeling of ‘team’.”

Even though the team was new, spread over such a big geographic distance, and dealing with the impact of a global pandemic on their lives and work, they’ve managed to carve out a strong identity.

“Some of the power of Range is obvious, but a lot of it is latent. It changes the way teams work together in ways that are just better,” Kristen says. “The team is so bought into the idea that they’ve built a culture that they’ve named themselves — the Vizzies. I don’t think they would have developed an identity or brand for themselves if they were on a team in different sites but didn’t collaborate that much. They really identify as a team, and it’s blatantly obvious to anyone who comes into contact with them. This has opened up all sorts of efficiencies for me as a manager that I could have never hoped to have done by imposing it. We couldn’t have gotten there without Range.”

Kristen is clear what life would be like without Range. “Unfortunately, it’s not hard to imagine, because that was my life a year ago. I was swimming in status reports that I didn’t have time to read, which were completely siloed. It was impossible for teammates to see what they could pitch in and help with. What I’m seeing now is totally different and part of our culture. People are seeing items in Check-ins, seeing they’re working on similar things, and inviting each other to collaborate. It’s no longer top down; now the benefits are organic.”

Next up: Check out our guide to running Effective Standup Meetings.

A tool for more efficient, effective, and inclusive meetingsRead More...

Highlights from interviews with Will Larson, Duretti Hirpa, Cate Huston, and more!Read More...