How many direct reports should a manager have?

A few months back I was running down the San Francisco Bay, looking out over the dry docks and concrete factories, pondering organization structures… as you do.

I was wrestling with two pieces of seemingly contradictory management advice:

Having worked in a range of different sized organizations the first piece of advice intuitively resonated. As you add layers of hierarchy, coordination becomes more complex and information gaps start to emerge. This phenomenon is sometimes referred to as the “Iceberg of Ignorance,” where executives only see 4% of the problems experienced by front-line staff. So, aiming to reduce hierarchy where possible made sense.

But how do you balance that with the second piece of advice? If you reduce the number of direct reports each manager has, you inherently increase the depth of the hierarchy.

Experience from managing a team that grew from 20 to 60 told me that managers should really work with fewer than 8 reports, and that’s assuming no other responsibilities. If you’re expected to spend time coding, for example, I felt that it should be no more than five. But, having recently talked to a couple of managers with 25 reports each, I was starting to worry I was off base and wondered whether companies were in reality favoring high number of reports and flat org charts.

I resolved to gather more data, and went out to my network on Twitter and LinkedIn.

Seven is the optimal number of direct reports

I sent out a Google Form and after a couple of weeks had 129 responses. The majority came from people in leadership roles: 15 CXOs, 17 VPs, 26 directors, 42 managers. Many were from engineering functions — though there were a number of designers and people ops folks.

Responses spanned startups, public companies, and not-for-profits, with the largest segment being “growth stage” startups. One-third of respondents were at companies with under 150 people, while 10 were from 70,000+ person organizations.

It turned out that the average number of reports for both respondents and the respondent’s manager was 7, with a standard deviation of 5. Directors came in slightly higher than other roles with an average of 9 reports. 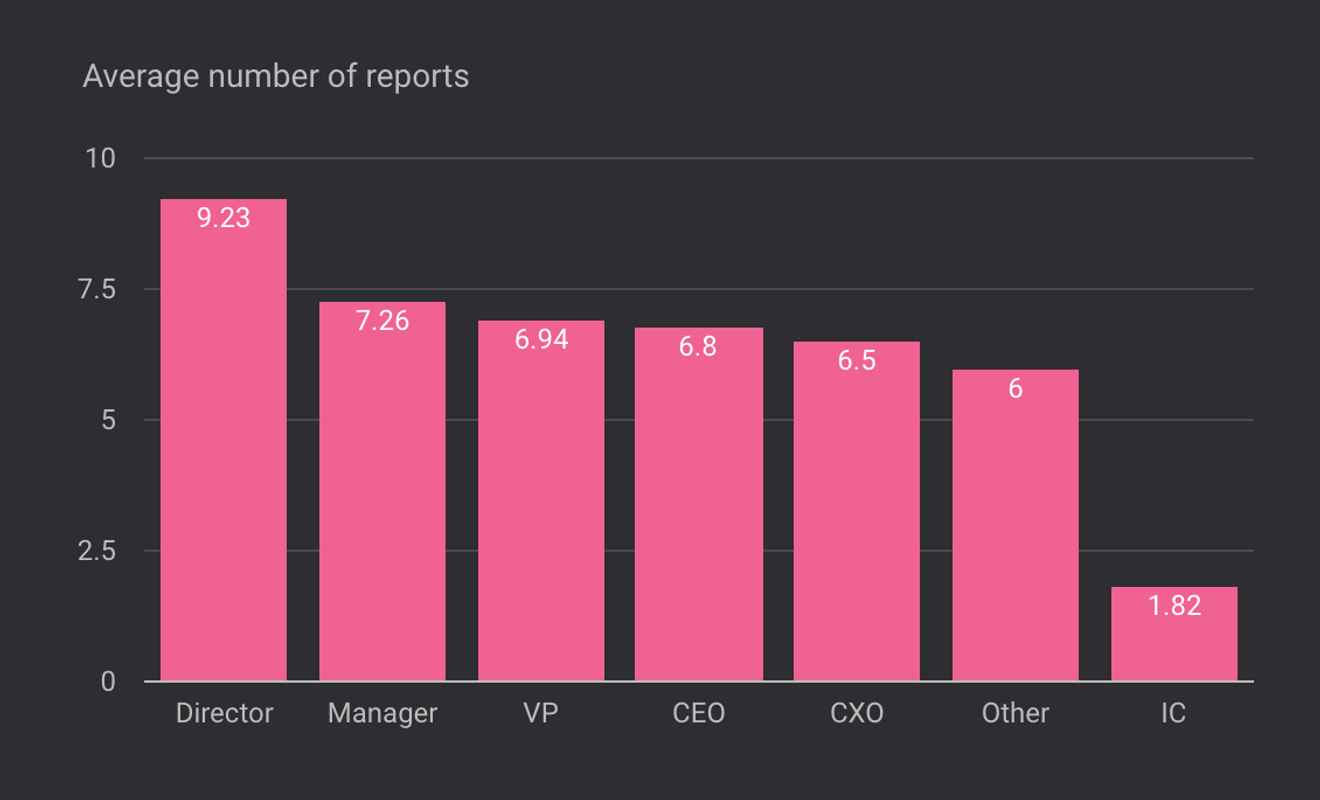 The biggest surprise was that when asked about the ideal number of reports — not for themselves, but as a general rule of thumb — the average was also 7, with a standard deviation of only 2.

This answer was pretty consistent across roles, with only CXOs and ICs offering a slightly lower number of around 6 reports per manager — which is perhaps a function of experience. When I dug deeper into these numbers, It wasn’t that people were self-reporting their own situation as being ideal, but on average it did mean that for this dataset the status quo was somewhat close to the perceived ideal.

Across seniority levels, people reported that seven was the ideal number of reports and that 11 was an upper limit for most situations.

In terms of maximum number of reports, most felt that 10 to 12 was an upper limit, with ICs reporting that 8 or 9 was the maximum number for a manager to be effective. 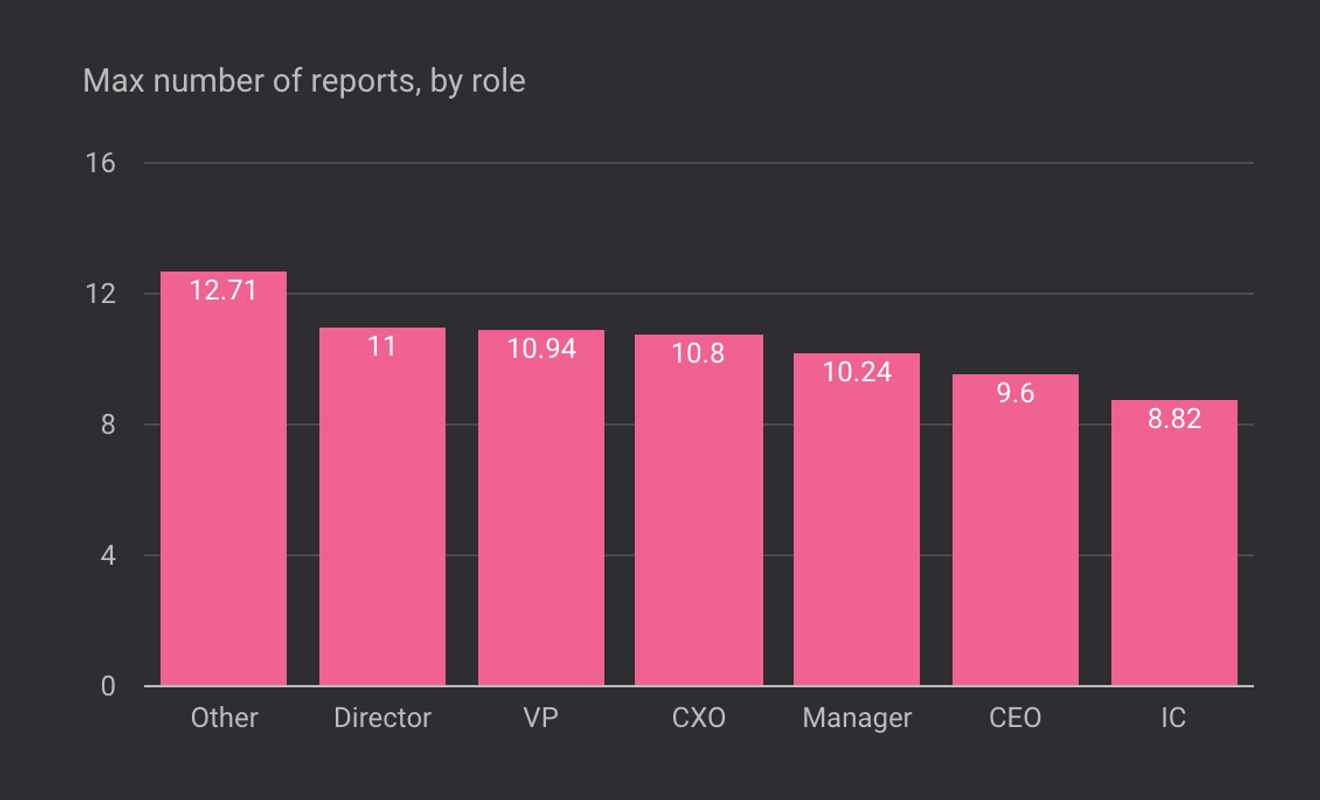 Not a one size fits all rule

Many respondents noted that these “magic numbers” lack nuance.

There are no absolute rules and situational factors need to be considered when identifying the ideal ratio for your team: type of work, team structure, seniority of managers, how much hands-on work the manager is expected to contribute, etc.

Reporting relationships and the number of sustainable direct reports are directly related to the company structure, culture, size, and the team dynamics, and the other responsibilities of the manager. The magic number, skills and structures that worked effectively at Palm, Facebook, Pebble, Intel varied dramatically, and the number I could effectively manage also depended on factors like the locality of my reports and their teams, and my own responsibilities to the broader organization. This is why there is no single magic number of reports that works for every situation.

Some respondents felt that senior reports required less attention, which would therefore give managers more capacity. Though several explicitly called this out as a common myth, including this Director of Engineering at a 200 person startup:

While some reports are "easy" it doesn't mean that you can lump on more and more reports. I find that easy and hard reports all need about the same amount of time just to ensure they are getting the attention and support they need.

There are other practical constraints. Jason Goldman — former Chief Digital Officer for the White House — pointed out that 1:1s are a cornerstone managerial technique in modern organizations, and thus quickly becomes the most constraining factor.

Eight 30 minute 1:1s a week consumes 10% of your work week. It is possible to switch to every other week, but at around 12 to 15 even this starts to fall apart. Jason went on to say that he strongly believes that once you’re no longer having regular 1:1s with someone you’re not actually managing them.

Going back to the original question that plagued me during my dock-side run, how do these data points on manager reporting ratios affect organizational depth?

Using the above rule of thumb, let’s say that we want our leaders to average 7 direct reports. New managers may have 2-3 reports, while some managers will end off closer to 10 or 11 reports before needing to delegate some of their responsibilities.

With these ratios a team can get to nearly 60 people with two layers of management: VPE → Manager → Engineer. In my experience, this can still feel pretty flat, if you are intentional about communication and planning. Adding a Director layer gets you to 400 people, by which point you've crossed the Dunbar number and are dealing with a whole new set of issues.

For larger organizations, the challenge really becomes how and when to subdivide in order to provide a feeling of alignment and cohesion. Four layers of management will get you to nearly 3,000 people, but this number of people laddering up to a single business unit or product division will cause alignment and communication issues that go beyond those that stem from just the deep management chain.

How many direct reports is too many?

When I joined Google in 2005 I reported to a Director with over a hundred direct reports. This certainly made the reporting hierarchy look flat, but the org chart didn’t reflect reality. Multiple products rolled up to this Director. I was on Gmail, and we broke out into backend and frontend teams; I think at that stage there was also a dedicated SRE team and a delivery team.

While situations such as this are hopefully relegated to historical anecdotes, it is increasingly true that the org chart does not reflect the real work. Teams are becoming increasingly cross-functional and it is becoming common for individuals to contribute to multiple efforts.

This is leading more companies to decouple their organizational structure from the management hierarchy. Which in turn is making it possible to maintain a relatively flat team hierarchy — or “hierarchy of purpose” — while ensuring supportive management structures are also in place.

Organizing people is hard, it’s a constant process of balancing different trade-offs and there really is no one size fits all solution. But there are principles, discovered through others’ real-world experiences, we should learn from.

So if you see a manager with more than eight reports ask yourself: is this situation really serving everyone? And it may be that you need to look for other solutions to the communication challenges posed by deeper hierarchies.

How many direct reports should a manager have?

Kate Heddleston on Managing Burnout on your Team

Jennifer Kim on How Startups can Hire Better

A list of actionable tips, plus insights from Range team members who onboarded remotely in the past yearRead More...