Hi—My name is Cornell, and I'm a queer gay man of color. I want to share a story about allyship.

It was a cloudy day in the fall of 2009. My living quarters were in the middle of what used to be a battlefield. I was a senior at Gettysburg College, studying for midterms and minding my duties as a resident assistant for upper-level students. A good friend of mine—a philosophy and theology major—invited me to attend a viewing of a documentary about growing up as a gay person in rural Pennsylvania. The film's director was from a few towns over, and the film had made the rounds at a few LGBTQ festivals. It was a whole event, with a thoughtful discussion scheduled for after the viewing. To my surprise, screening was put on by the local Unitarian Universalist Church, which I knew little about initially. As a gay college student, my thoughts on religion were not amicable. But I was open to the experience, and I'd do anything to see new films—I'm a bit of a film geek.

The movie was insightful and heartbreaking at times. I could relate to the pain and anxiety, even though I grew up in a big city. But the moment that truly opened my eyes to an experience that was not lived by me but that I could feel viscerally was when a transgender woman attending the event spoke of her experience with such gravity and anguish.

She commanded the floor, and no one stopped her or interrupted. I was floored, confused, hurt, and angry. I eventually asked questions. How did she get here? Why was she still there after all the pain? At that moment, I realized that it was the first time in my life that I had ever sat down, in a group, in solidarity, with someone from the transgender community, and listened and engaged. Surely I'd been around other transgender people before, or at least talked about them with friends. Or had I? I didn't grow up in rural America, but I knew what it meant to be closeted. I found her stories even more crushing: to hear that she often didn't have the cruel and twisted benefit of being able to "hide" who she was.

I cried that night. And many nights after. But I vowed to myself to speak up when I could. And to listen when asked to my transgender brothers and sisters.

From my social circles to the honor of working with brilliant transgender men and women in previous roles, who are data scientists, marketers, and engineers—I'm an ally, a colleague, and a barricade to harm.

The promise I made to myself was to be there for a laugh, a solemn moment, and a good debate. That night, the film expanded my understanding of rural gay America. It was also the moment I decided never to take others for granted. I don't always get it right, and I'm one of the first to apologize for that mistake and try to make it better.

As allies, we are friends, family, citizens, neighbors, and spouses. But as I am a receiver of ally support, I am also an ally to others in need of the community. That's what diversity and resilience mean to me—showing up, getting it wrong (this is inevitable), taking time to process, discussing and course correcting, and moving forward together.

If you'd like to help support the trans community (particular vulnerable black trans and queer lives), please consider contributing to The Okra Project. 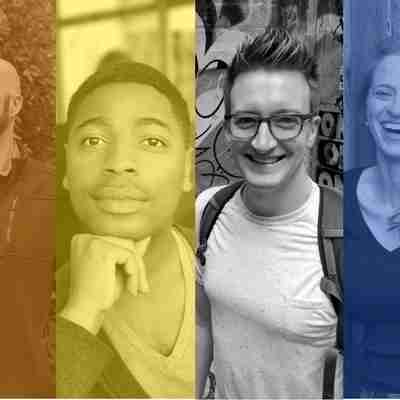 Pride, pandemic, and protest
Sean shares a story about self-reflection and finding new ways to honor pride. Read the story.