Don’t all 8-year-olds think they’re different? Didn’t we all still think the world revolved around us at that age?

That’s when I realized I was different. Not especially different, just kind of different different. I didn’t know that I was, was becoming, or would be gay, and I don’t think I knew what that word meant back then. And then, whatever I should’ve understood that word to mean would be encumbered a few years later by the youth of America deciding gay meant stupid. (Conveniently, I’ve blocked out any memory of me possibly misusing “gay,” though I know I certainly did.)

I became more consciously aware of my kind-of-different differences with the help of my male peers, a few of which I thought were friends. It was mostly name-calling, which was fine because I was ace at ignoring whatever jeers were mumbled or hurled my way.

Just about all of my friends were girls. I played with them during recess because the boys were unnecessarily dirty — they actually played in dirt — and they weren’t good at following rules of any kind.

Back then (the mid-90s), I did what I imagine a lot of queer youths did — I suppressed. This mostly meant dimming whatever light I had to shine to ensure I didn’t call attention to myself and ask for teasing. Knowing what I know now, I wish I would have felt secure enough to accept myself and run with it. I didn’t, and that’s just what it is. I struggled to reconcile that the life I wanted was different from the life I was supposed to want. I’ve long since gotten over that.

Insecurities aside, I’ve always known who I am. Not just me being gay, but all the traits and characteristics that make me who I am. I think most of us do. It is when we are led to believe that our differences make us some new brand of weird that we begin to hide ourselves away. It is when we refuse to accept or are prevented from accepting who we are that we summon the demons that plague us.

So shine. Shine like the uniquely different human you are and have always been, and shine with the security of knowing the world of today is fighting to lift up and listen to us kind of different different folks. 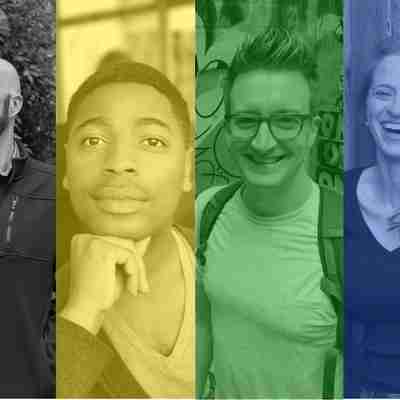 Inspiration near and far
Nick shares a story about finding inspiration in friendship. Read the story..