Understanding and learning to manage your micromanaging boss

Modern management is a bit like the tale of Goldilocks and the Three Bears. It’s not always easy for managers to find the sweet spot of their craft. (And yes. Management is a craft.)

Many managers, unfortunately, become “absentee managers.” They essentially ignore their employees until a problem arises, then call them out for said problem. If these managers aren’t ignoring team members, then they’re often a micromanaging boss, which has actually (and horrifically) been linked to shorter life spans for employees. (That study has been backed up by similar studies.)

Of those two management styles, neither does their employees any favors.

Micromanagers have a special place in the contempt section of most employee hearts. When a team member of ours posted on LinkedIn about causes of micromanagement, people chimed in left and right. Everyone seems to have a theory about the origins of micromanagement, so let’s begin there.

Where does the micromanaging boss come from?

The need to micromanage can come from a number of places. Anxiety, low self-esteem, and a desire to simply do it all can most certainly contribute to being labeled a difficult boss. Here are five additional, common theories.

People are often promoted based on task mastery at a certain level. When they get to the next level, they need a new set of skills around people management, budgeting, or whatever else that next role entails.

But often, these people cling to what they already know and were considered good at. So now, whoever has assumed the new manager’s previous role and responsibilities, (“the monthly engagement recap document”), the manager wants to go and tell that person, “Well, here’s how I used to do it, and it was well-received.” That begins the process of becoming a micromanaging boss.

Work is about control at some level, even if we try to gloss over that discussion. Silicon Valley scaling legend Molly Graham has admitted this, using a powerful Legos analogy to define how people think about their jobs.

In short: Who really wants to give away their Legos as a child? If you begin to see work as about controlling processes and protocols, you are on your way to becoming a controlling boss—a micromanager.

Colleague trust in the workplace globally is about 46% per research, which might feel high. But remember, a 46 on a test in school is still a failing grade. When employees don’t trust each other to get work done, and some of those employees subsequently become managers, the chances of micromanagement increase.

Unfortunately, too many hiring processes begin as a cluster-mess whereby the recruiter doesn’t know the specs of the role (because they’re a recruiter and not a manager on that team). The manager can’t find time for the recruiter because they’re too busy. Hiring for the role ends up happening through a series of low-context emails.

The recruiter sources and screens candidates, sends them to the hiring manager, and finds out the candidate is apparently not a good match. Everyone worries about the cost of the seat being unfilled, and ultimately someone is hired who may not even represent exactly what skills are needed for that role. If you bring in someone without the right skills and the manager immediately realizes that, micromanagement is usually the next step.

This is a common refrain from micromanagers about why they do what they do. (Look at the LinkedIn thread above for more examples.) This is largely the result of people wanting to feel relevant at work, which is only natural as we spend 8-12 hours a day there.

Now that we know some of the origin stories of the micromanaging boss, it’s time to solve the problem as best we can! We’ll break this into leaders and employees.

We all come to dread it: the micromanager. But how do you know if your boss is one? 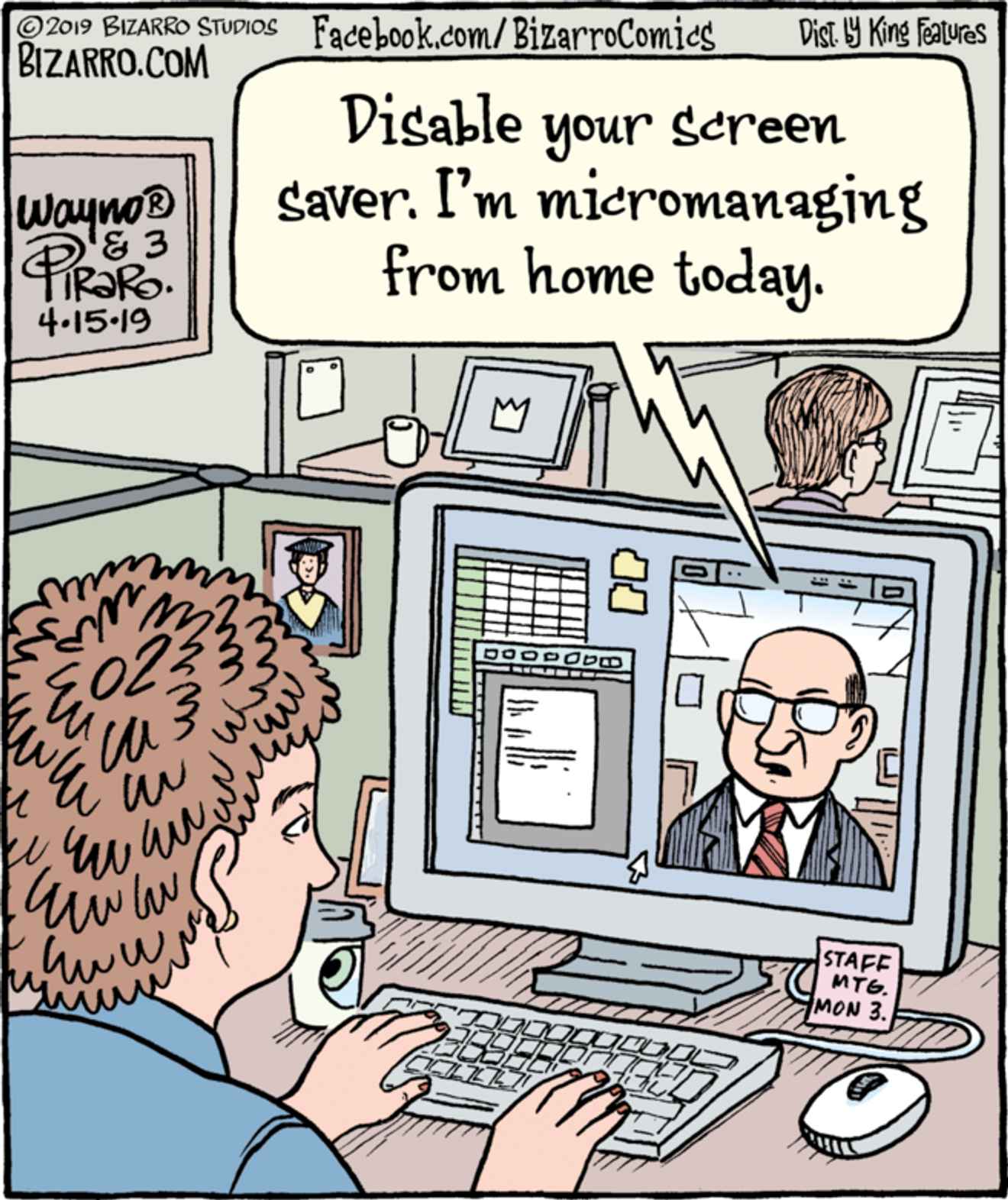 5 signs of a micromanaging boss

It’s not even so much that a micromanager avoids delegation as it is that when they delegate they also instantly become involved in the work that was just delegated. This is unfortunate not just for the direct report; the manager is also affected in an unexpected way. A few studies, like this one from Harvard Business Review, have shown that more effective delegation leads to a higher lifetime salary for the delegator.

Micromanagers are obsessed with check-ins and status updates, but not in the good way. Work is rooted in communication, and it’s good to know what others are working on and where their priorities lie.

But micromanagers want to know every little detail of every little thing, and they usually want to be updated in a deck or report format a few times per week. We actually once worked with a manager who wanted to receive presentation decks on progress a few times per _day_, which is utterly ridiculous. Why? Because the time it takes to prepare the decks two or three times a day cuts into the actual project work.

A new project is assigned, detailed, and downloaded. As the employee begins to digest it and figure out what the initial steps are, the manager swoops in with advice, the need for a check-in, or something else. If the manager is on the employee before the employee has even commenced the project, usually that’s a micromanager.

Process is great for organizations, and usually the truest path to scale. At the same time, process can be a weapon when used incorrectly, as many managers unfortunately do. Micromanagers love process. And worse yet, they typically love process for the sake of process, which refers to processes that don’t actually improve the efficiency of work getting done. They exist because they’ve always existed and no one has questioned their existence.

5. Forest for the trees

The devil is in the details, for sure, but you also don’t want to cohabitate with the devil, and many micromanangers do this. They will over-focus on a grammar error or a tiny mistake within a document instead of trying to resolve the big picture around what needs to be done.

Remember: typos are bad, yes, but ultimately a lot of the stuff that companies care about internally is not stuff that customers will ultimately care about. Look at the big picture and the end game. Micromanagers usually look at the details they can immediately control.

How leaders can stop micromanaging

Broadly and above all, realize that good leadership is about letting go.

As far back as 2010, we have research that people who believe they’re constantly being micromanaged perform poorly overall in their job. So while you might think you’re doing your team members a great service and teaching them “the right way,” in reality you’re likely tanking the productivity of your team.

Admittedly it requires some self-awareness to see the difference, and admittedly not every person who becomes a manager has that ability. So take a step back and look at your team. Do they seem fearful of you or connected to you? Fear can be a powerful motivator, yes, but it doesn’t work nearly as well in the professional realm.

Becoming a better manager is very hard, and it’s a long road to get there. Per Gallup, 82% of managers end up being defined as “the wrong hire.” (Wow! 🤯) One way to avoid both being a micromanaging boss and being an absentee manager is to find more ways to build trust across your team, which is a mix of small gestures and conversations and bigger elements, like gradually increasing the responsibilities of different team members.

📕 Read our guide on how to build trust on your team in just a few minutes a day.

In The Coddling Of The American Mind, authors Greg Lukianoff and Jonathan Haidt often reference this phrase:

Prepare the child for the road, not the road for the child.

They’re talking about parenting, but it can apply to management too. Give your team the basic skills they need and knowledge they seek, and then sit back and see what happens. If they fail, it’s fine. Come in, course correct, and then let them try again on their own.

The road will always be littered with challenges, difficult clients, partnerships gone awry, and so much more. As a manager, you can’t control for all of that reality. However, if you let your team try—succeed or fail—without your constant intervention, you will build trust and not be seen as a micromanaging boss.

5 strategies to help you deal with a micromanaging boss

This is a little bit tougher, but here are some strategies and ideas to help you work better together with your manager.

1. Talk to them directly about it and propose a plan

Ask your boss for a bit more autonomy. Remind them of projects you’ve successfully completed on your own. And, to ease them into this, try “How about I work on this project for a week? After that I’ll offer a full debrief of where everything stands in the format you prefer on Thursday at 3PM.”

2. Talk to colleagues about how they’ve handled it

Veteran coworkers or teammates who have worked with or under your manager longer might know what words, ideas, and proposals resonate the most with your micromanaging boss.

3. Talk to other managers

“How best can I work with them? I know they want the best for our team and that they’re a stickler for details, but I think this micromanaging is preventing me from being truly productive.”

This is a second-to-last resort because going above a manager can cause lots of issues with trust. But if the micromanagement never seems to stop, go talk to their boss and layout exactly what is happening. Be honest: Have you messed up on projects? Do you need more guidance? What would an ideal week look like in terms of project check-ins for you?

This is the last resort, and we don’t necessarily endorse it. However, there are some micromanaging bosses who are unlikely to change. That’s the sad reality of the situation.

If you find yourself reporting to one of those bosses, nothing else seems to be working, and your stress levels are up while productivity is down, it might be time to begin you a new job search and look elsewhere for gainful employment.

With work and teams, the ultimate goal is that everyone be on the same page—managers and employees alike. Everyone ought to be in sync (knowing what other people are doing) and the whole team should be in alignment (people understand where the true priorities lie, and there’s a line of sight around multiple projects).

When a manager can look at a tool like Range and know where things stand instantly, there’s less of a psychological pull to be a micromanager. The behavioral tendencies of micromanaging bosses can most certainly be improved! When priorities and line of sight are clearer, and when the status of work is visible for all to see, making improvements to your working relationship with your manager (or your team and management skills) will be a reality.